In with the new(s): Matthew Griffin elected as The Chronicle's next editor-in-chief 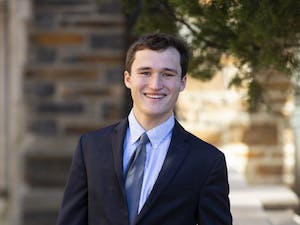 Sophomore Matthew Griffin was elected as the editor-in-chief of The Chronicle’s 116th volume.

In a staff-wide election Friday evening, members of the student newspaper chose Griffin to succeed junior Jake Satisky as editor-in-chief of The Chronicle and president of the Duke Student Publishing Company, Inc., the publisher of the independent, student-run daily newspaper.

Griffin—a political science major with a minor in French and a certificate in policy journalism and media studies—is currently a university news editor and will begin his one-year term as editor-in-chief April 22.

“What’s so great about student journalism is that we’re at this university where there’s so much going on and so many people with so many backgrounds and interests and areas of expertise,” Griffin said. “I want to capture as many of these as possible.”

As editor, the Charlotte, N.C., native will focus primarily on making The Chronicle a “digital-first” organization while capturing the spirit of campus life.

“Pushing forward online is not just an obligation for The Chronicle, it’s also an opportunity to tell stories in new ways, whether that’s in a digital way or in a non-traditional text way, but to really experiment with how The Chronicle does journalism,” Griffin said.

Readers can expect to see an expansion of The Chronicle’s digital presence and a change in the structure of the print product. This doesn’t necessarily mean more content, Griffin clarified, but instead more curated content that has a specific voice and more emphasis on interactive elements.

“Digital can really capture the spirit of life on campus in a way that isn’t necessarily The Chronicle injecting a voice or a tone but just capturing campus life,” Griffin said.

The printed paper, in Griffin’s plan, will transform into “a more niche product, more focused on features and long-term stuff,” using visually appealing themes and covers to entice students to pick up the editions.

Griffin also aims to include more campus voices in both The Chronicle’s staff and stories.

“It starts with dialogue. I don’t have all the answers and I can’t pretend to have them,” Griffin said regarding how to diversify the organization. He plans to create “policies that foster inclusion and diversity that will, year over year, transform The Chronicle.”

Satisky noted Griffin’s work ethic and dedication as valuable skills that will make him a fantastic pick.

The outgoing editor recalled a time when Griffin was covering a rally in Washington, D.C., during the Supreme Court hearing about the Deferred Action for Childhood Arrivals. While he expected Griffin to speak to students after the rally, Satisky was surprised to hear that he was traveling to attend the event, and even more surprised when Griffin offered to help edit other stories on the drive home.

“It’s really indicative of his spirit,” Satisky said. “He takes assignments and goes above and beyond.”

Managing Editor Nathan Luzum, a senior, cited Griffin’s close attention to both big picture goals and small details as one of the characteristics that make him most fit for the position.

“Matthew’s commitment to The Chronicle during his time here has been nothing short of outstanding. I have full confidence that he will excel in the role,” Luzum said.

Sophomore Priya Parkash, also a university news editor, was sure that Griffin will go above and beyond for the sake of the paper. She remembered how Griffin’s goal has always been to run for editor-in-chief, and she is excited to support him during his tenure and see what he will bring to The Chronicle.

Regarding the legacy that he intends to leave, Griffin noted that The Chronicle is doing a good job transitioning to a digital-first organization, but still has a long way to go.

“I see next year as a time when we need to get a sense of our identity and what The Chronicle looks like going forward,” Griffin said, “not just for one year, but for the next decade and the rest of our time.”

The Chronicle staff has recently completed digitizing the newspaper’s print editions from 2000-2009 with the support and leadership of Chronicle alumnus Harsha Murthy, '81. With this phase of the digitization complete, all issues of The Chronicle from 1959-1989 and 2000-2009 can be retrieved and searched online. These archives will be a huge resource and benefit to Duke students (including current Chronicle staffers who need background or historical information while preparing stories), Duke alumni, journalists, historians and others interested in the story of Duke University.

The digitized issues from 2009-present can be found on The Chronicle’s primary Issuu site: https://issuu.com/dukechronicle/docs

The digitized issues from 2000-2009 can be found on The Chronicle’s Archive Issuu site: https://issuu.com/dukechronicleprintarchives

The digitized Chronicle issues from 1905-1989 can be found on the Duke Library’s site: http://library.duke.edu/digitalcollections/dukechronicle/